Where Does Santa Go on Vacation 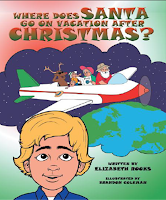 Elizabeth Rooks has released her second children’s book, “Where Does Santa Go on Vacation after Christmas?” which has been received with much joy among the fans of her first release, the highly imaginative “Rayne: Queen Water Supplier of the World”. As a testament to her first release, her second effort also speaks directly to the imagination of children and promises to be one of the best children’s books released this year.
Elizabeth Rooks infuses “Where Does Santa Go on Vacation after Christmas?” with her wonderful insight on the imagination of children while showing off in a positive way the nature of the world around us. Her book features Tyler, a highly imaginative boy who asks a simple question about Santa Claus that all of us might have asked at one point. After doing all that work in traveling around the world to deliver toys to all the children of the Earth, where does Santa go on vacation to rest? The subject alone makes this effort one of the best children’s Christmas books and easily one of the best children’s books to be released this year that centers on the holiday season.
Tyler imagines Santa going to far away places like Japan and learning how they say, “Hello” in a language that is much different than his own. Learning the cultures of far away places helps take Tyler as well as the reader along for the trip as Santa stops at places like Hawaii to learn about the people who live on these exotic isles. The wonderful trip Tyler takes with his imagination is the perfect subject for a children’s Christmas book.
In her latest book, Elizabeth Rooks has managed to capture the imagination of a child and relate it to her readers that no doubt have asked the same question. Answering that question is really up to the children who read the book as they become aware of the other cultures that live on their world as well. This subtle, wonderful way of exposing the cultures of other places helps grow the imagination and appreciation of children for people who live far away.
Born in Haiti, Elizabeth Rooks came to the United States at the age of seven, discovering a world far different from the one she came. She has managed to tap into that wonder and infuse her books with the same awe and delight that she experienced as a child. Currently, Elizabeth teaches children of special needs in Newark, New Jersey, she has acquired a Master’s Degree in Children’s Literacy and is a cancer survivor. Her life experiences as well as her career give her a unique insight into the imagination and wonder that a child views the world.
This is the perfect children’s Christmas book and makes a wonderful gift for the holidays. Given the success of her previous effort, “Rayne”, there is little doubt that “Where Does Santa Go…” will become one of the best children’s books of the year. You can order the book on the author’s website http://www.elizabethrooks.com/where-does-santa-go-on-vacation-after-christmas/ and visit her Facebook page www.facebook.com/ElizabethRooks1 or her Twitter page https://twitter.com/Elizabeth_Rooks where as well to see the future works she has in store.